If you have never heard of reduced or conventional tail swing excavators, then understanding the difference between the two will benefit you while hiring or buying one. As you go deeper into investing more in the type of excavators the question of the tail swing will no doubt come up. However, by applying this knowledge to your site assessment, you will be able to make the best financial and positive decisions to benefit the productivity of your project. In this article, we will discuss zero-tail mini excavators’ vs conventional mini excavators and will help you to understand more about the tail swing in excavators. Why it becomes a bit factor and the benefits are choosing specific machines. 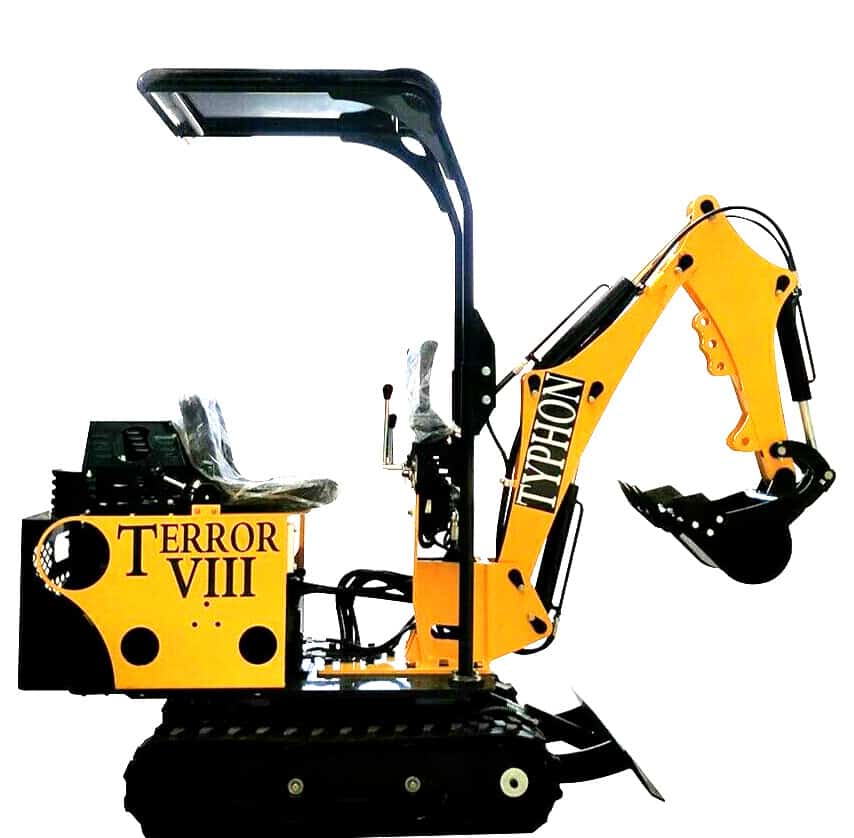 What is a conventional tail swing mini excavator?

What is a reduced tail swing mini excavator?

Zero-tail swing or reduced-tail swing excavators are different from conventional-style machines because their bodies rotate within their tracks. These reduced tail swing machines are designed so that the counterweight balances underneath the rear of the excavator to maximize distance away from its pivot. As there is less room for the counterweight to be housed, it has a direct impact on the total load capacity of the machine. 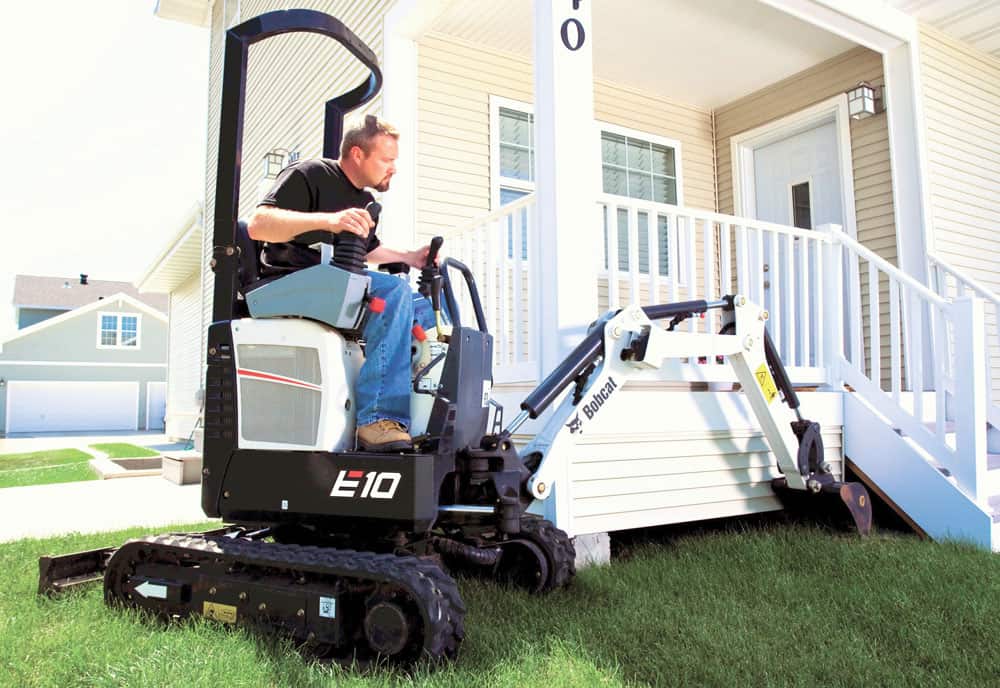 A conventional excavator will usually achieve the maximum digging performance among all the different types in the market. A larger tail swing equals more leverage, in effect resulting in a larger output and capacity. These types of excavators are ideal for long-reach tasks in wide open spaces where there are no or little amounts of hurdles or obstacles. These conventional excavators are also popular as cranes to lift large weights if needed.

Reduced or zero tail swing excavators are very beneficial while working in tighter spaces. Unlike conventional mini excavators, their counterweight only exceeds the chassis of the machine by only a few centimeters. This makes for a machine that is highly maneuverable in built-up areas as well as one that offers a larger lifting capacity than zero tail swing machines. 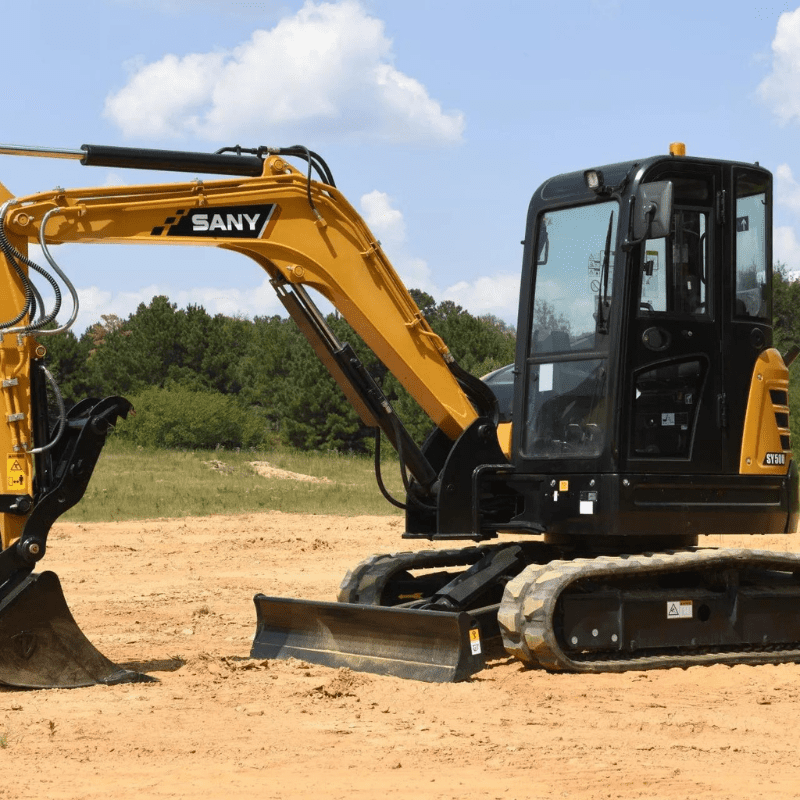 When choosing a mini excavator the minor differences can all add up, particularly with efficiency. Over long periods of use reduced tail swing excavators are less efficient than conventional. This is because a conventional excavator can handle larger, faster loads than a reduced tail swing model. But your decision to choose either machine should be down to the amount of access and space you have available. The other small disadvantage to using a reduced or zero tail swing excavator is the ability to access and maintain them if something is to go wrong. As you can imagine, manufacturers have had to try and pack what space they have available with all the machines functioning components. This, in turn, can make maintaining some models far more difficult than a conventional mini excavator. 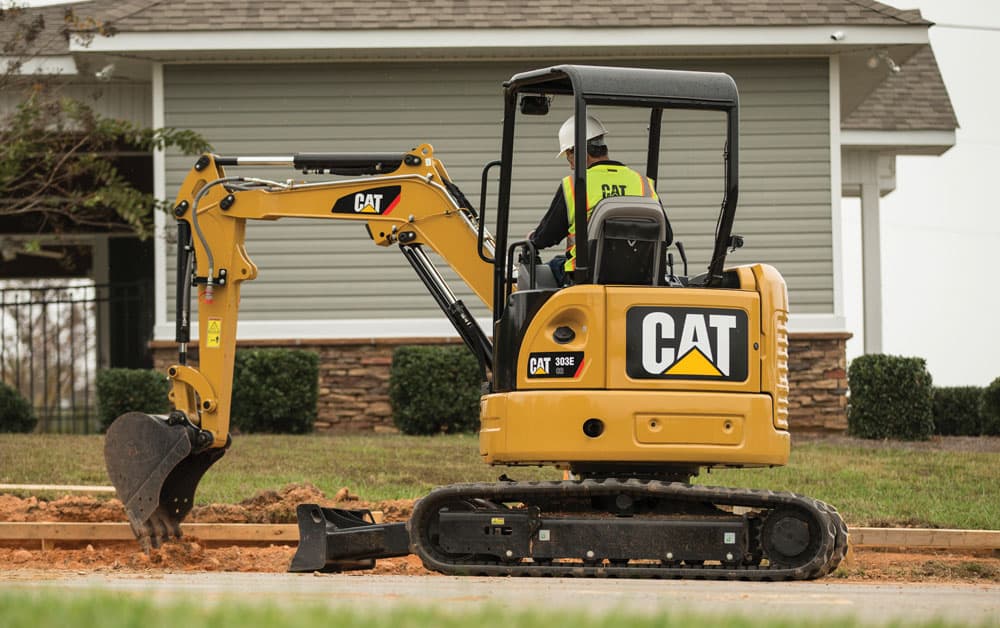 Analyzing the specific requirements of your excavator is important to ensure that you hire the correct machine. Tail swing of both a reduced and conventional excavator can be found in a machine’s specifications but if you’re unsure then always consult a professional to help. Here are key considerations while hiring a mini excavator.

Which one is more expensive to hire?

Hiring a conventional or reduced tail swing excavator is a cost-effective method of speeding up your project. But prices are a crucial thing to think about. Prices of machinery can fluctuate between suppliers as well as how they classify their machinery. Reduced or zero tail swing excavators can be classed as specialized equipment which can increase the cost of a weekly hire rate (dependent on the company). But this is not always the case. Companies operate with newer machinery regularly and will have very competitive prices for their reduced and zero tail swing machines. This is because manufacturers constantly change the way they design and build mini excavators. Specialized excavators like reduced tail swing machines are generally slightly more expensive to hire than conventional ones. But it depends on the company you’re working with. Difference between a conventional swing and zero tail swing excavators:

While working on construction projects it is crucial to select the right machine for the application. Your selection will greatly affect your work efficiency and the ease with which you’ll complete a job. As far as excavators are concerned, the tail swing is an important aspect. It greatly impacts the mobility and maneuverability of an excavator. Tail swing is important while you’re working on a small site with tight spaces and there’re obstacles to navigate.

If you’re working o a small site with multiple safety hazards, experts recommend going with reduced or zero-tail swing models. However, this feature also depends on the size of the excavator as well as the amount of load the machine is going to carry. Excavators are available in the market in three different configurations which are zero-tail swing, reduced tail swing, and conventional tail swing. In a zero-tail swing design, the excavator body or housing doesn’t extend beyond the tracks or wheels while rotating. While in reduced tail swing the housing extends only a few inches. Anyhow all of these configurations have their own pros and cons. But one must consider all factors before renting or buying an excavator of a particular configuration.

If you’re working in urban and residential projects where the site area is limited or confined, a zero tail swing or reduced tail swing excavator is more ideal because of the reduced radius. It can easily maneuver around tight spaces and there is also less chance of damaging the surrounding environment and property. The models with reduced or zero tail swing rely more on the weight out back for balance. They lift the material with more weight out front and sides. For road maintenance and highway works, these models are handy. They can easily fit in a single lane and you don’t have to stop traffic flow. You can use them for undertaking utility service and maintenance with single lane closure and minimal interface.

Conventional swing on the other hand relies more on hanging out a counterweight. Due to that, these have more lifting capacity as well as buck and arm breakout force. Because of spacious housing, it has more room in the cab and is easier to work with. So if you’re looking for greater flexibility along with strength and operation then it is better to go with a conventional swing. These are best for all-around performance in general construction applications and offer more front linkage and work tools and usually, the initial purchase price is less than a reduced tail swing machine. Regarding maintenance and servicing a conventional type wins again.

In a reduced or zero tail swing the mechanic and service provider has to work hard to access components as the manufacturer has squeezed everything into a small space. Now that you’re through to the different types of excavator configurations, it’s time to pick one for your project. But make sure to evaluate the jobsite and the applications before making a decision on your excavator hiring or buying. You also need to consider the task ahead and any special requirements for the project. 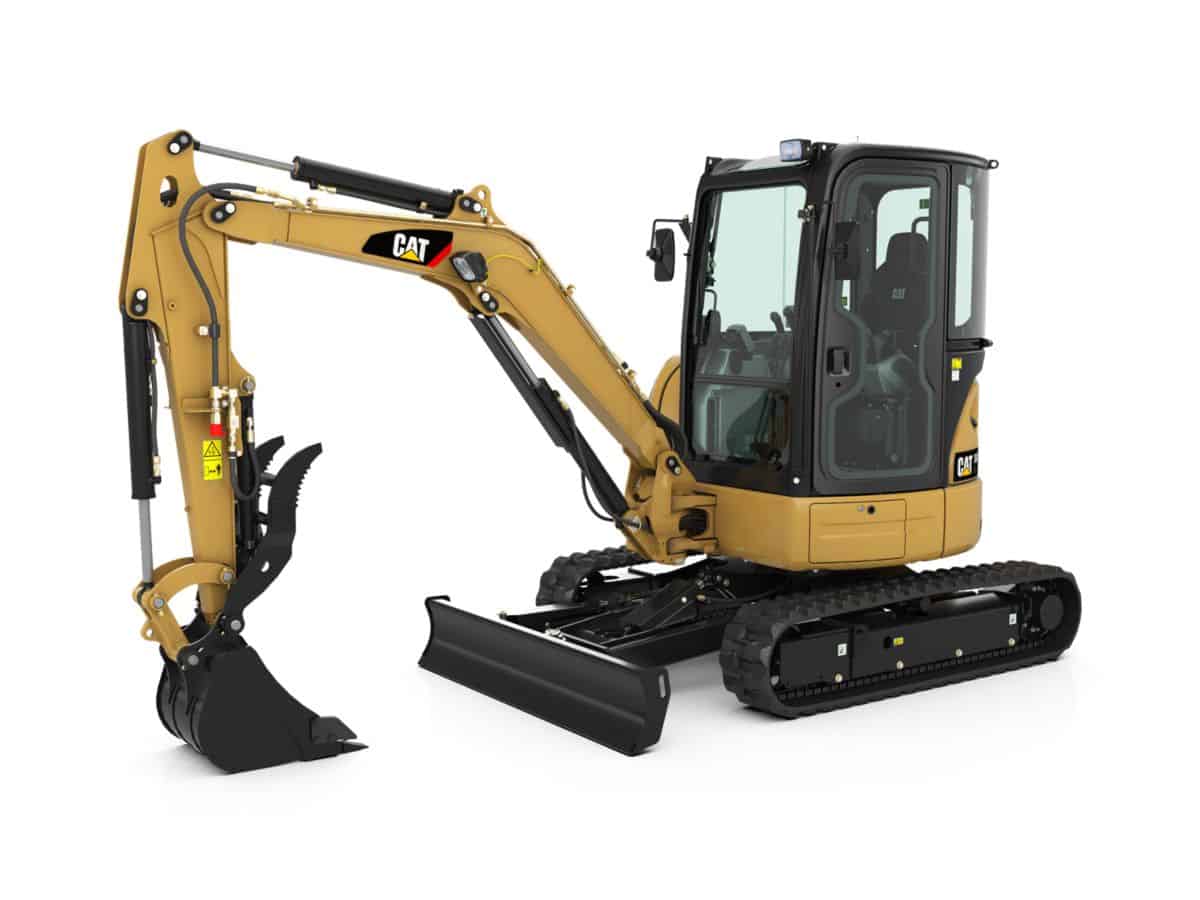 Right criteria to purchase the best excavator type for your business:

However, some manufacturers offer excavators with a shorter/reduced tail swing to work on confined job sites without sacrificing performance. A reduced-tail-swing excavator configuration is ideal for working in limited or restricted spaces since the machine’s counterweight profile typically extends inches rather than feet beyond the machine’s tracks. Before selecting a conventional or reduced-tail-swing excavator, you should consider the following: typical job sites, regular tasks, key machine specifications, attachments, machine efficiencies, and maintenance considerations.

Excavators are routinely operated on various small- and large-scale construction projects, from residential and commercial construction to infrastructure projects. It is important to properly match your machine to its work to maximize productivity. Conventional-tail-swing excavators are most often operated in excavating, grading, and site development where space constraints are not a concern. They are also commonly used on infrastructure commercial building site projects to load material into trucks. 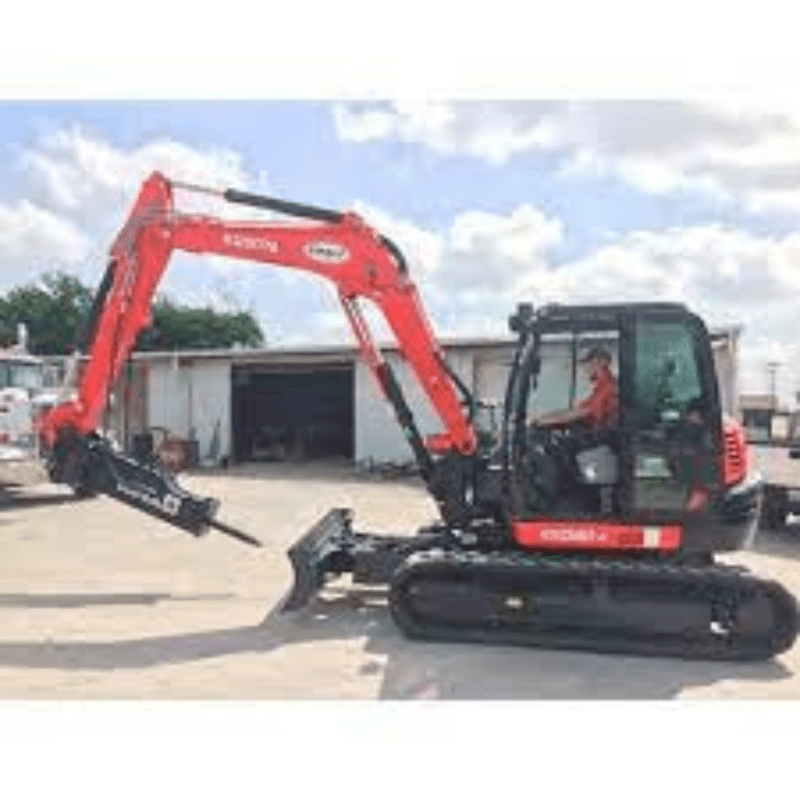 The trend with reduced tail swing excavators is on the smaller side of the crawler excavator spectrum, typically between the 14- and 30-metric-ton size classes. The smaller stature coupled with reduced tail overhang creates a popular combination for both transporting the excavator and operating it. Available as an option for some reduced-tail-swing models, the crawler excavators may be equipped with rubber track pads. This option may be popular if you are working on established surfaces, such as finished concrete or asphalt, to minimize ground disturbance when compared with traditional steel tracks on crawler models. It may also save you and your crew time because you may not need to lay down plywood or other types of mats to minimize surface damage. Another option available for some smaller crawler excavators is a dozer blade. Simplify backfilling and use your excavator to fill, smooth and level trenches more efficiently. A smooth cutting edge on the excavator’s bucket allows you to clean right up to the edge of the dozer blade, reducing further cleanup later. In addition, the design of the dozer blade is suitable for moderate site grading, reducing the need for other equipment to complete the task.