How to achieve maximum efficiency of mini excavator 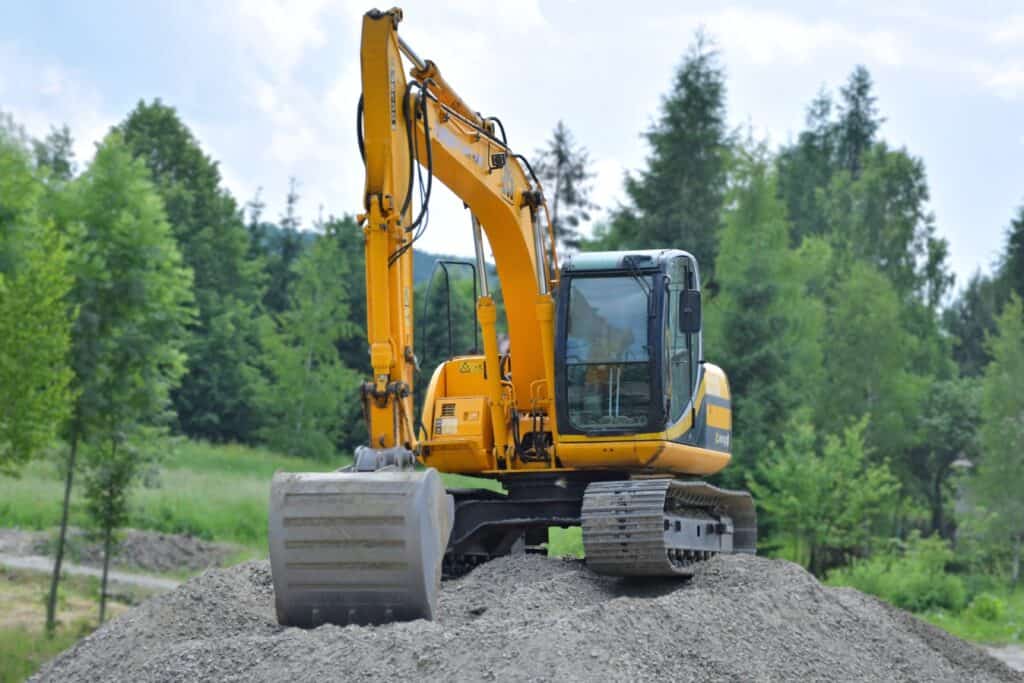 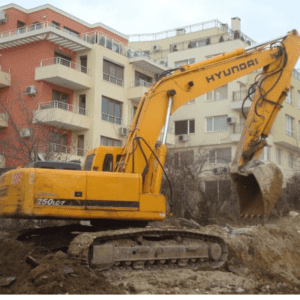 How to achieve maximum efficiency of mini excavators:

Fuel efficiency is one of the major advancements in mini excavators. The new mini excavators have a smart hydraulic system that features bucket regeneration, and boom priority and reduces internal losses in the hydraulic circuit for increased efficiency and productivity and also reduces fuel consumption. Ultimately increasing the net efficiency. Pump flow is also controlled to avoid the inertia from overflowing the overload relief valves while maintaining sufficient digging power and maximum swing torque. So it can save a substantial amount of fuel depending on the working mode. This feature is called ECO mode. With ECO mode you can save 8-12% fuel in heavy digging. If you use the highest setting in the general mode you will be saving a lot more fuel.

This system is available mainly in Volvo mini excavators and other construction equipment. The system allows maximum utilization of available engine power regardless of the application. Pilot pressure is monitored by low-pressure sensors located on different pilot lines such as swing, travel, bucket, boom, and arm. While the main pump pressure is controlled by high-pressure sensors located on the main pump lines integrated with the computer of the machine. Smooth pump flow output during the operation resulting in higher operating efficiency. More importantly, hydraulic power is matched to the available engine power at any given moment under any loading condition.

Boom float lowers the boom simply by using gravity which results in more flow to the arm circuit which ensures faster cycle times and enables grading and finishing operations to be carried out easily. The other advantage of boom float is that its more comfortable for the operator and has faster cycle times due to which the operator doesn’t have to fight the machine to maintain the bottom of the bucket in contact with the ground surface while leveling and pump flow is prioritized to the arm and bucket during truck loading. Previously hose rupture valve had to be included for this option which makes it an expensive option. So now HRV (hose rupture valve) is eliminated from the bottom float option to add more value to min excavators. 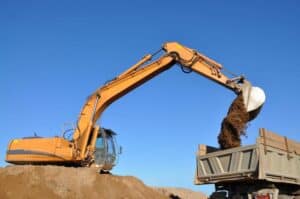 Pumps have a huge role in fuel efficiency and power generation for any machine including a mini excavator. Fuel efficiency gains are made by matching the flow to the application. Variable speed matching is a pump control technology that allows the engine speed to adjust according to the demand placed on the system. So with higher hydraulic flow applications speed of the engine will remain high in order to provide the optimum output while in lower hydraulic flow applications slightly low engine speed due to lower hydraulic demand on the system. This system is in contrast to previous models where engine speed remains high and uniform throughout the working cycle. The reduction in engine speed during low-load applications results in a more efficient system which will help to reduce fuel consumption.

Initially, this technology was introduced for a single hybrid mini excavator model but it can be spread to other models as well. The expansion of the hybrid concept is quite a possible thing because the technology can be scaled up for larger-size class machines or down for smaller-size class machines. This technology comprises three components. The first one is the swing motor which is electric on the hybrid as opposed to hydraulic. The braking portion of the swing motor generates kinetic energy during the work cycle. This kinetic energy is stored in the Ultra Capacitor which is the second component of this system. Ultracapacitor not only stores energy but also converts it into useable energy which will be used in the third component, the generator motor. These hybrid excavators provide the same performance but can reduce fuel consumption by up to 25-40% in certain operations as compared to standard excavators. Reduction in CO2 emission is also a big advantage. Through an electric swing motor, the hybrid is able to capture the kinetic energy which is produced during the braking action during the swing phase of the work cycle. Normally this energy would dissipate as heat when the machine swing slows down. 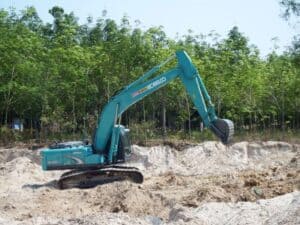 The latest mini excavator particularly Hyundai excavators have several new systems which work together to give proper power to different systems based on the job. Some of them are the Computer Aided Power Optimization system (CAPO), the Boom and Arm Flow Regeneration system, hydraulically Dampered Travel Controls, Attachment Flow control systems, and the Pump flow Control System. The CAPO system allows the operator to set power according to the job he/she is doing. It allows three power mode settings (Power/Standard/Economy), three work mode settings (Digger/Breaker/Crusher), and user-defined settings based on the need of the operator. The Pump Flow Control system reduces pump flow when controls are in the neutral position, saving power loss. During any operation maximum flow is delivered to each actuator based on the control movement, providing fast, smooth operation of each component. The attachment Flow Control System provides adequate hydraulic flow to attachments which prevents excess flow and smooths the operation.

How to achieve maximum efficiency of mini excavator in terms of fuel:

The air cleaner is one of the key parts in determining fuel efficiency. This is the easiest and most cost-effective change to make but it has a huge impact on the fuel efficiency of the mini excavators. As the air filter traps dirt the airflow is restricted. Due to this engine can’t get the air which quantity which it needs so it can’t perform properly. That’s why changing/cleaning your air filter on a regular basis can significantly improve fuel efficiency. Some excavators come with standard airflow restrictions which warn the operator when it is time to change the filters. However, waiting for this warning means you’ve already arrived at the point where you’re likely wasting fuel. A visual inspection should be done every 50 hours to ensure peak operating performance. Most machines allow quick and easy access to the filters and can be easily inspected daily before starting the job.

Just hydraulic oil engine oil is also important as well. It ensures optimum lubrication which means less friction during the operation. So it becomes easier for engine parts to spin and they become more energy efficient.

If you’re performing a job that doesn’t require full power then running the engine at a slightly lower engine RPM can have a significant impact on fuel economy.

Keeping an eye on fuel burn will give you a better idea of when how much fuel your excavator is burning. It’s very useful if you have employees or contractors using your machine for work. In a situation where you’ve got two operators, using the same machine to do the same job you might find our one operator is able to use the mini excavator a lot more efficiently than the other. This would provide an opportunity to improve the performance of another operator.

This feature is mostly available on Volvo machines including mini excavators. It reduces fuel consumption by automatically switching the engine to the high idle setting after five seconds of inactivity. It lowers the RPM of the engine to save fuel. Five seconds is the default setting for the auto idle feature, but it can be changed to activate from three seconds of idle time up to twenty seconds. The operator just needs to touch a joystick or foot pedal and the engine will return to its normal mode and full power. This feature improves fuel efficiency without reducing productivity.

It’s almost similar to the auto idle feature. However, this feature shut down the engine after five minutes rather than switching to idle mode. After four minutes of inactivity, the machine will give a 60-second warning that the engine will shut down. Once the sixty-second period is up the engine of the machine will be switched off. Through this feature, any machine can be left idle for 40-60% of operating time which contributes significantly to fuel consumption.

Eco mode is available in machines of various brands including mini excavators however this usually lowers the rpm of the engine by 10%. This feature works by controlling the pump flow to avoid inertia overflowing the overload relief valves while maintaining maximum digging and swing efficiency. Eco mode reduces the flow and pressure loss and improves the pump flow control. This results in a 5% improvement in overall efficiency.

Training the operator regarding fuel efficiency and consumption is equally important. A well-trained operator can save more fuel as compared to an untrained one. Investigations show that a highly skilled operator can effectively reduce fuel consumption by as much as 10-12%. Moreover, 30% of contractors believe that high-level pilots are the key to business success. A good operator should have experienced construction experience, excellent driving skills, and rich construction knowledge in order to increase production efficiency and reduce fuel consumption. 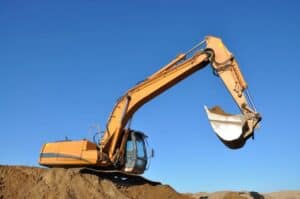 In daily routine operations of mini excavators, the idle time of equipment at any construction site is as high as 40-50%. During the idling, the oil burned by the engine does not create value which is equivalent to burning money.

Different factors such as construction sites, equipment operation, and layout will affect the overall fuel consumption and production efficiency of the excavator.

During the loading operations with a mini excavator, the rotation angle of the excavator must not exceed 60 degrees and the range of 30-45 degrees is more appropriate. The smaller the rotation angle the higher will be the output and fuel consumption will be low.

Many studies have shown that the correct use of radial tires can save up to 10% of fuel consumption. Among them, tire pressure has the most significant impact on fuel efficiency. When the tire pressure is insufficient the resistance of the excavator will increase so does the fuel consumption and the output will decrease due to unstable equipment movement.