The Difference Between Wheeled Vs. Tracked Excavator – The Ultimate Guide 2022 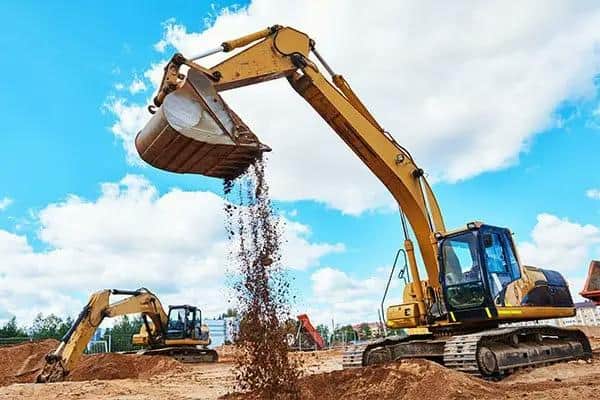 There are multiple types of compact excavators that you will find in the market. Wheeled excavators and tracked excavators are two main types. These construction machines have their differences that can help you prefer one over the other. If you know about civil engineering terms, then differentiating between them is easy.

However, if you are a beginner, then deciding which one is better for you can be difficult. You have to analyze multiple factors such as operating weight, attachments, structure, etc. This article will help you learn about wheeled excavators and tracked excavator machinery for your job site. 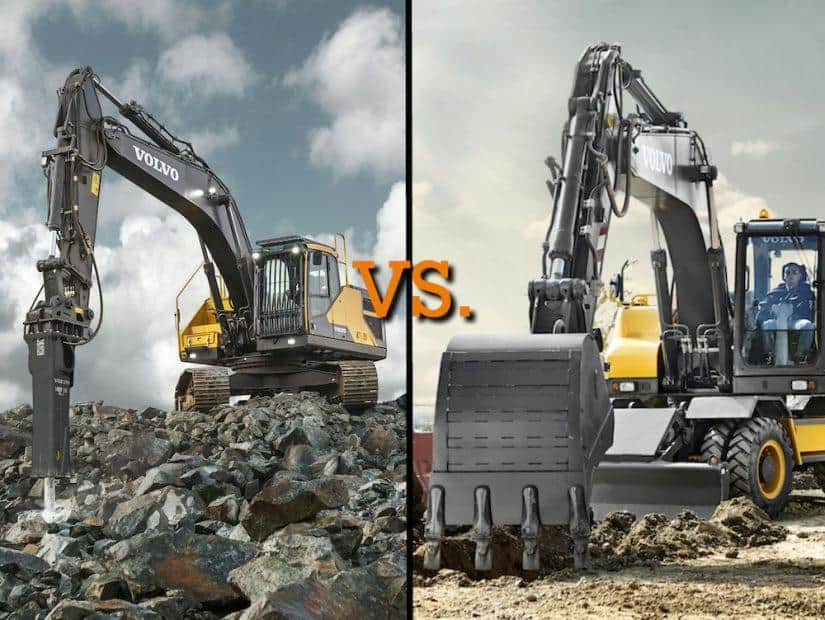 What Is A Wheeled Excavator?

A wheeled excavator has wheels to move from one place to another. It works like other excavators, but the only difference is its wheeled structure and the maximum number of attachments.

A wheeled excavator called a backhoe, digger, or a bucket wheel excavator is a machine that removes or moves the earth on a construction site. Wheel excavators are very flexible since they can manage the work off-road or on the road.

A wheeled excavator provides versatility, allowing the machine to switch to other attachments required for the job. It has fuel-efficient engines and can travel at high speeds.

Like other excavators, wheel excavators have well-matched components that deliver high power and take care of the environment with low emissions. For the driver to drive this type of excavator, you need a Car (Class C) LICENSE LAUNCH.

In recent years, wheeled excavators have become popular on job sites due to their flexibility and advanced features. 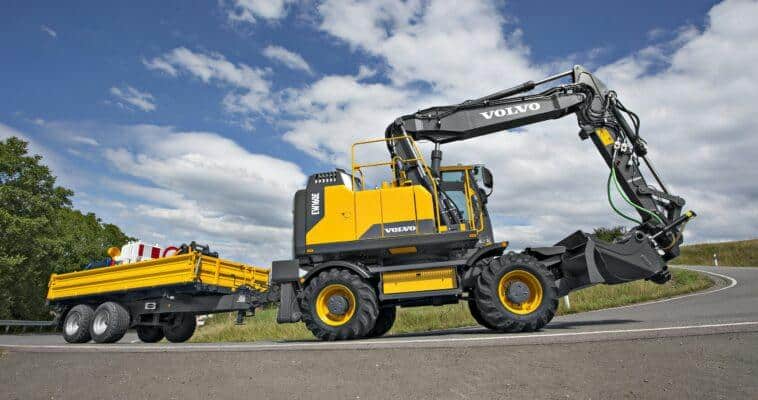 What Is A Tracked Excavator?

A tracked excavator is a piece of earth-moving equipment operated by a set of tracks instead of wheels or tires. These are used to dig large holes as it is their primary purpose. There are also other uses of tracked excavators such as demolition structures, digging ditches, and basements.

The four main parts of track excavators are the boom, shovel, undercarriage or tracks, and the house. The operator runs the excavator in-house. It runs on diesel. 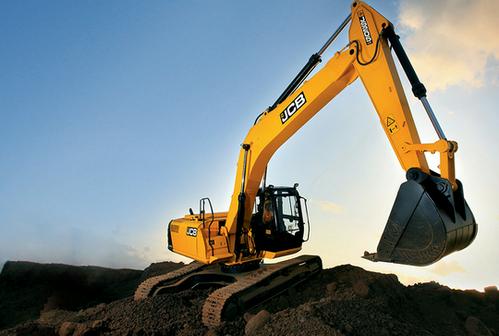 What Is The Difference Between A Wheeled Excavator And A Tracked Excavator?

A wheeled excavator is not as good at digging as a tracked excavator, but if you add attachments and a coupler to a wheeled excavator, you will be surprised as it can do a variety of jobs and can maneuver in places where some other heavy machine would be impossible. 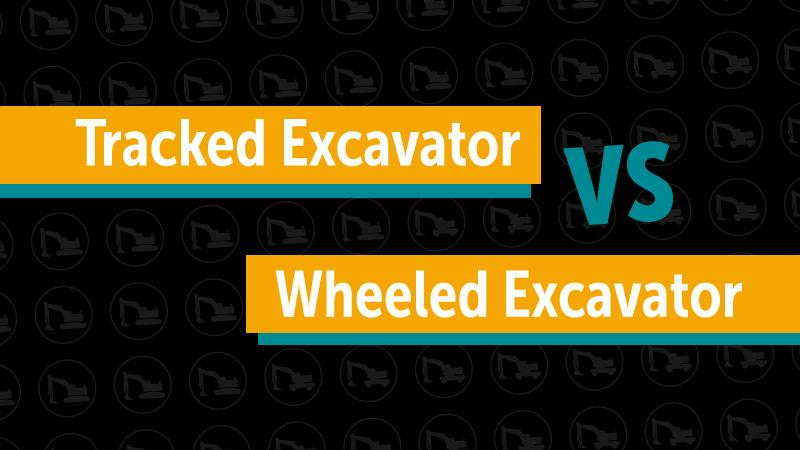 What Factors To Consider When Choosing Between A Wheeled Excavator And A Tracked Excavator?

A low center of gravity for tracked excavators makes it easy to work on steep terrain or hills. Tracks are not punctured if a site is rocky and has uneven stones or sharp raw materials.

Wheeled excavators provide road-friendly alternatives and transportation for road, bridge, and urban work. A wheeled excavator can be driven from site to site. They can be safely operated on finished pavement without worrying about damage to concrete or asphalt. 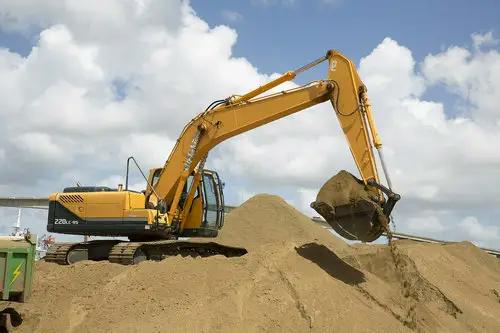 Nature Of The Job

Wheeled excavators are road-friendly and have high speed. It is used if you have more than one site cause it can easily travel from one construction site to another. Viewing different projects, it has been known that tracked excavators will take twice as much time to complete a task as wheeled excavators. 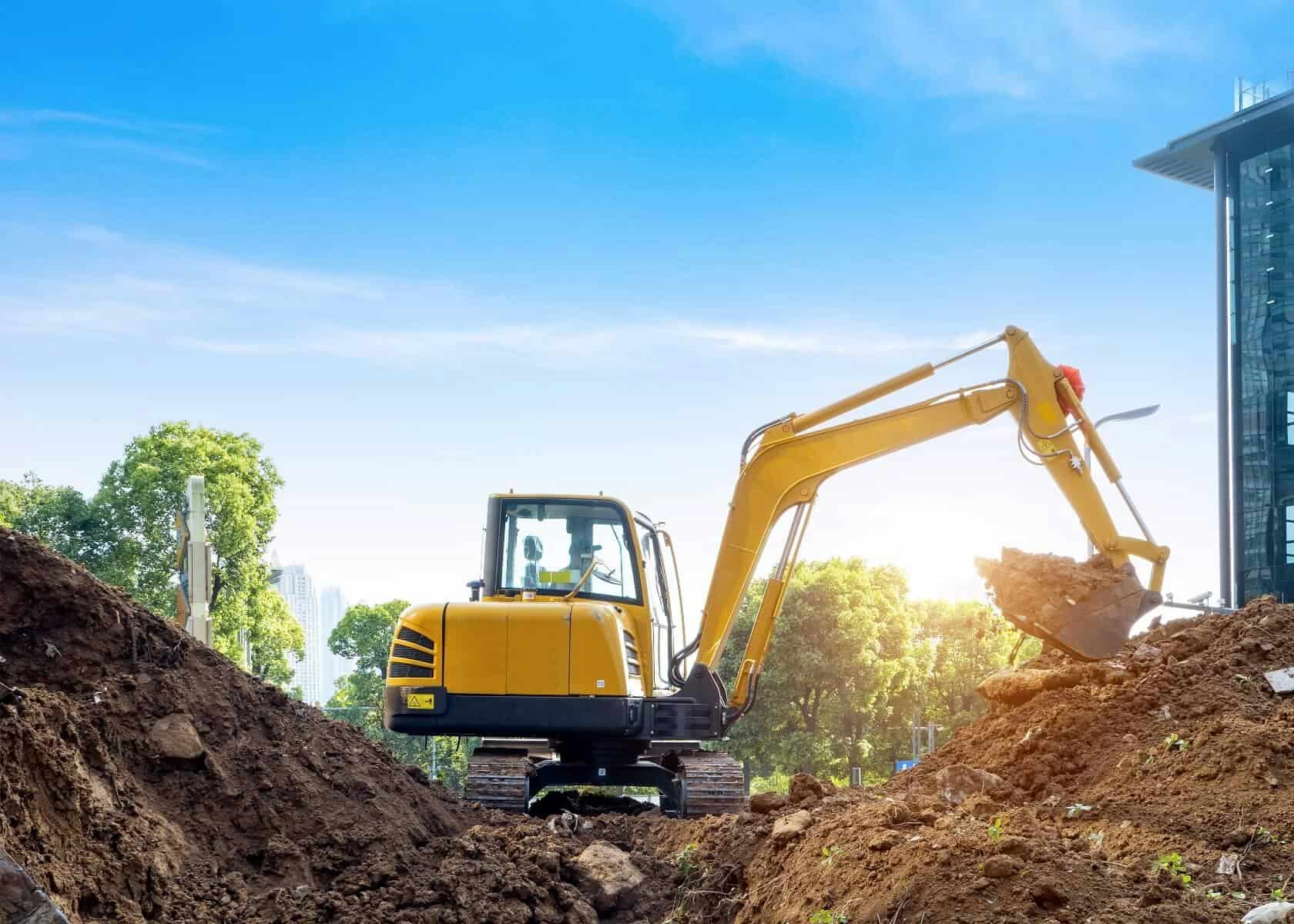 On the other hand, wheel excavators can easily move around different construction sites and carry materials from one construction site to another. The wheeled excavator arm can be retracted for greater visibility when driving by a dual hydraulic boom. 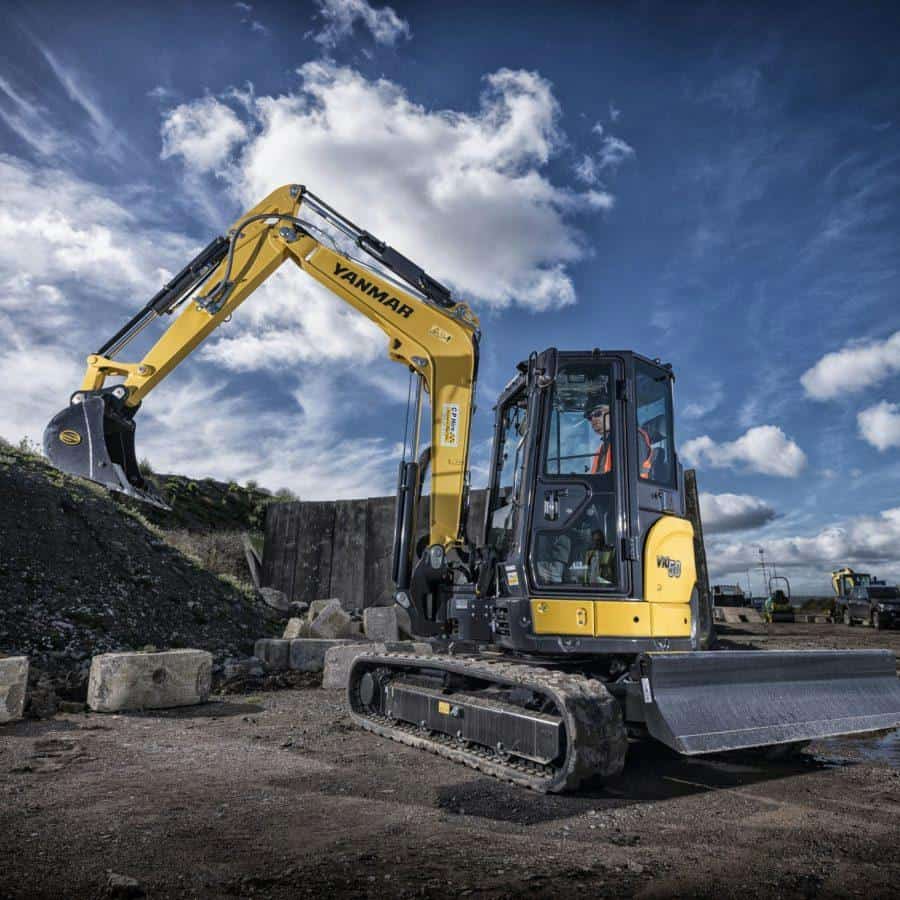 Sizes of wheeled and as well as tracked excavators vary. It doesn’t matter if you choose a wheeled or tracked excavator, but it is important that you have the correct excavator size for the required job.

A wheeled excavator undercarriage takes less damage than a tracked excavator, and its parts are easily changed. Wheel excavator wheels and brakes last much longer and are less expensive if you want to change or replace them. 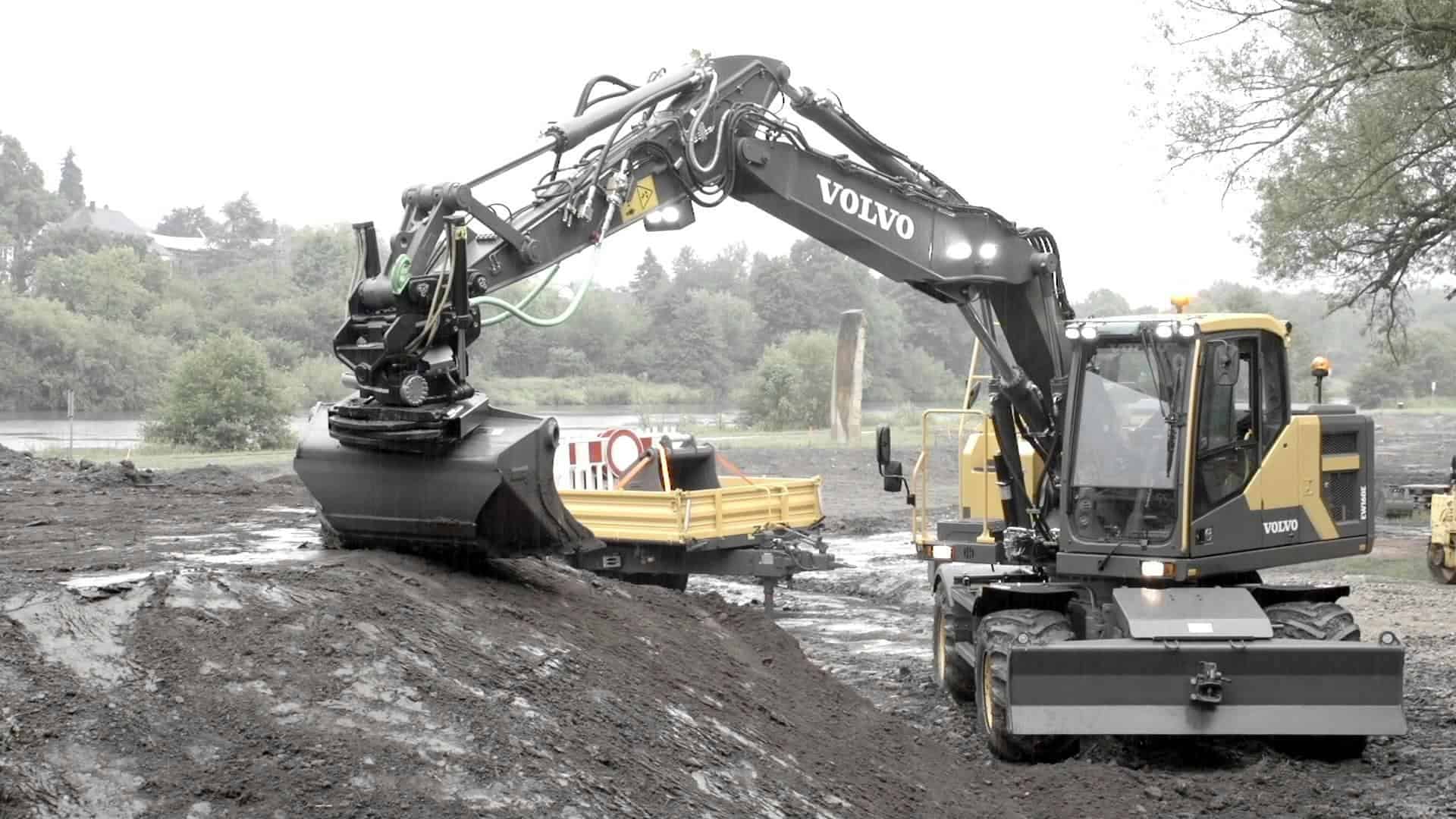 Tracked excavator’s primary purpose is digging and can also be outfitted with a crusher, shear, or hammer for demolition and other jobs. On the other hand, the wheeled excavator can also do all these machines with a hard surface beneath it. However, tracked excavator leaves its track marks on the surface, destroying it.

Wheeled excavators, because of not destroy the surface beneath them, can do jobs in urban environments, building slabs and parking lots. Wheeled excavators installed with attachments can not only dig or demolish earth but also clean ditches from roads, move concrete barriers, cut asphalt, and mow and dig trees.

A wheeled excavator can travel a speed up to 22 miles per hour. It can easily travel to different construction sites if paved surfaces or roads are made between them. Due to this mobility, productivity will improve if you have multiple jobs to achieve around a large construction site.

Multiple countries, such as India, Korea, Canada, Taiwan, the USA, etc., have excelled in the business of excavators. Some popular brands are JCB, Kubota, Hitachi, Bobcat, etc. They sell different models in their country. You can choose the one that matches your needs.

However, buying from China can benefit from high-quality, low prices, and better customer support services. Moreover, shipping from China is easier and cheaper compared to other countries. You can search them through the internet and place an order online.

Knowing about the factors differentiating between the wheeled excavators and tracked excavators is not the only thing to do. You have to find the right manufacturing company or industry for your excavators. China owns the biggest trade market for the manufacturing of multiple products. You can find high-quality excavators in the Chinese market easily.

The best part about Chinese manufacturers is that they prioritize the satisfaction of their buyers through their best services. Contact Us now if you are looking for a highly experienced and amazing dealer of excavators at an affordable price.

PrevPreviousDifference Between An Excavator And A Backhoe – Everything You Need To Know
NextCrawler Excavator Vs. Wheeled Excavator – Which One To Choose?Next